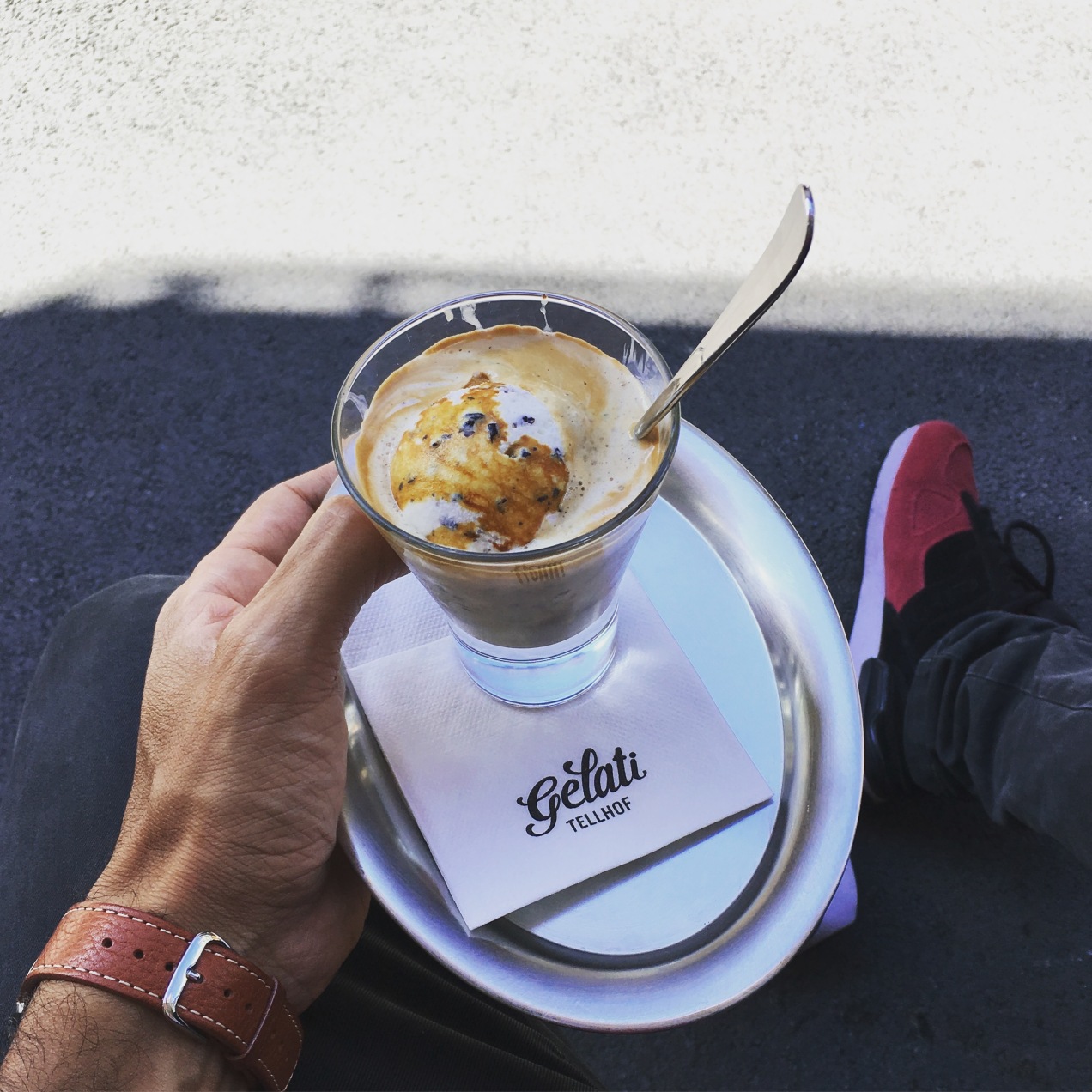 According to some, like Donald T., of course there’s no global warming, but with temperatures soaring, fires occurring, heat records being broken and people all over looking at ways to keep their cool, here are 6 ways to keep your COFFEE COOL this summer – and recommendations on where to get your cool caffeine fix in my current home town Zurich. If it’s not just summer coffee options you’re after in Zurich, then you can also of course check this post.

I’m not sure how it is for you, but when it’s hot in summer I often find myself drinking less flat whites, cortados, cappuccinos and espressos. On the one hand I still feel myself craving coffee, but on the other hand when it’s hot and sweaty I don’t find the idea of drinking a hot beverage quite that enticing. So, with summer temperatures currently a bit milder, I thought I’d come up with a list of drinks for those of us who don’t want to cut down on their caffeine intake when temperatures go back up and over the 30°C mark. 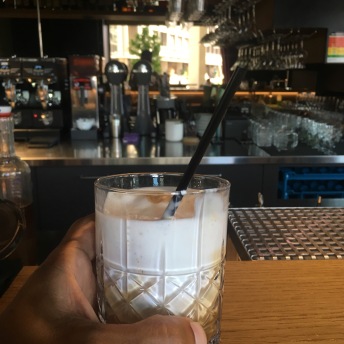 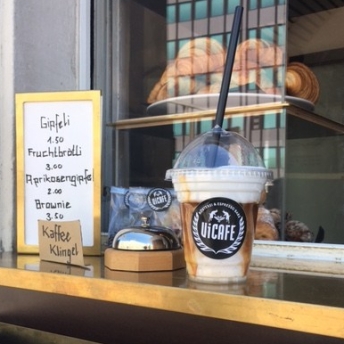 In Greece, where I discovered my love for this drink, and which is also where it’s consumed more than anywhere else, when ordering it, you are asked if you’d like it sweet, semi-sweet or unsweetened. A classic Freddo Cappuccino is basically an espresso poured over ice cubes and then topped up with some cold frothed milk. The creamy rich texture of the milk is created by using a shaker, which unfortunately many coffee shops outside of Greece don’t usually have.

ViCafe – isn’t only known for arguably being the most popular place in town to grab a coffee on the go, but it’s also one of my favourites to get an Iced Cappuccino. 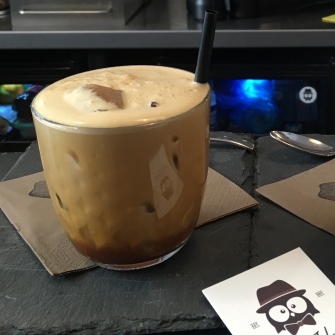 A typical Freddo Espresso consists of a double shot of espresso (usually about 60 – 70 ml). Depending on how much foam is desired, the espresso is mixed with 4 ice cubes in a shaker for 10 – 20 seconds. Then the liquid is strained into a glass with ice cubes. Often when ordered the customer is asked if the drink should be sweet, semi-sweet or unsweetened. 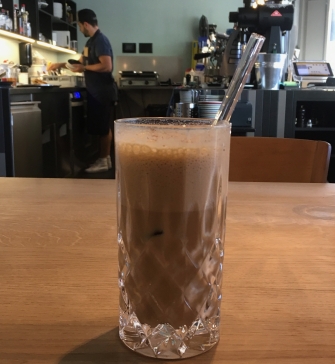 Of course, I realise that this isn’t a coffee-based drink, but it is widely served in coffee shops. And despite not really being a tea drinker, this summer I’ve really enjoyed this drink. Iced chai latte is basically cooled chai (black tea infused clove, cinnamon and other warming spices) poured over ice cubes and topped up with milk.

Bros Beans & Beats – still one of my absolute favourite locations in Zurich, serves a very nice Iced Chai Latte, of course along with their other great coffee drinks. 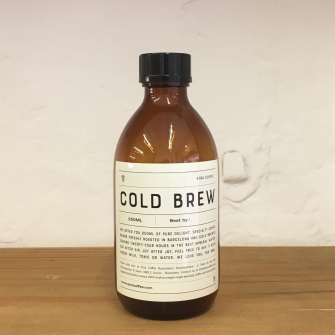 It’s been popular now for a while, but its popularity seems to be growing even further, with even supermarkets jumping on the bandwagon and stocking bottles of cold brew.

This cold coffee drink is made by steeping ground coffee in water at room temperature for over 12 hours, before the grounds are filtered out. It is then cooled in the fridge, and can be drunk in many different ways, with ice cubes, ice cream or tonic.

In the meantime, cold brew is basically everywhere, so there’s no real need to emphasize any places. Two of the first places I noticed highlighting their cold brew offering in Zurich were the Milchbar and Henrici. 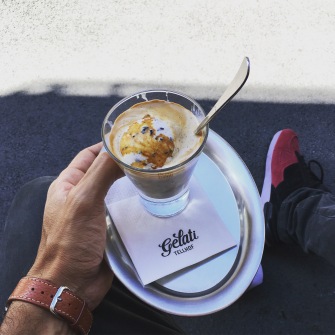 For me, a good affogato is like a ticket to heaven. What could be better than a tasty combination of two of the loves of my life, coffee and gelato. For those who don’t know it, a traditional affogato is a scoop of vanilla ice cream with a shot of espresso poured over the top of it. The warmth of the coffee melting the ice cream, creating a soothing and comforting mix of yummy. If one goes to a gelateria for an affogato, you will have the luxury of having numerous flavours to choose instead of the classic vanilla. My favourite flavour for affogato is stracciatella, but many other milk-based flavours can also be quite tempting, such as pistachio, hazelnut or chocolate.

Gelati Tellhof – my go-to-place in Zurich when it comes to enjoying an affogato to the max. Not only is the gelateria itself a great escape from the nearby hustle and bustle of Langstrasse, but the affogato is also always served with a smile and style on a lovely little tray. Apart from coming for the gelato on offer, with coffee beans from local roaster Stoll Kaffee, it’s also certainly not the worst place to go and relax with a nice coffee. 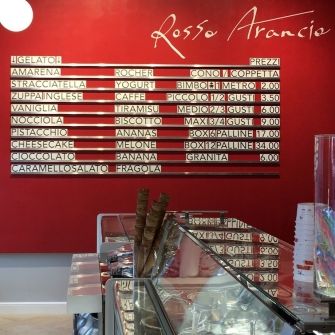 In a way this is the simplest. Coffee gelato or if need be coffee ice cream, and yes, there is a difference. If you want to know the difference between gelato and ice cream, read one of my older posts. Although it’s the simplest to explain, it’s certainly not that simple to get right. Luckily there are some great gelaterias around which do a great job, and luckily not only in Italy!

Rosso Arancio Gelato Italiano – my favourite place in town when it comes to gelato. Many flavours to choose from, with the freshest, usually locally sourced ingredients. Always some new different flavours to give a try and the coffee gelato certainly comes as close as possible, for gelato to taste like you’re drinking a freshly brewed cup of coffee!

Any drinks missing? Or any advice on other places to visit in and around Zurich, or even for my upcoming trip to NYC and California? Let me know..